In a previous post we introduced the general concept of stochastic clocks. Here, we consider the case where the instantaneous rate of activity process has the dynamics

is a standard one-dimensional Brownian motion and

are constants. The corresponding time-change is given by

Laplace Transform of the Time-Change

and start by computing the Laplace transform

, we recognize this as the time

price of a zero-coupon bond with maturity in

in the Cox et al. (1985) model; see e.g. Musiela and Rutkowski (2005). Since solutions to stochastic differential equations have the Markov property, it follows that

is adapted to the filtration

, it follows that there exists a function 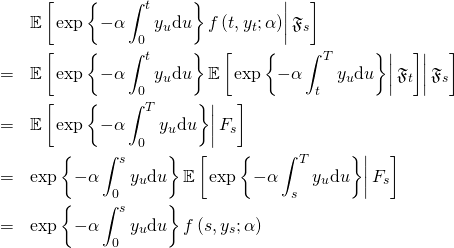 It follows that the process

-martingale. Using the Itō product rule, we find that its differential is given by

Here, we used that the first factor of

is a process of bounded variation. Furthermore, we assume that

so that the Itō formula can be applied. It follows from the martingale property that the drift term in the above differential has to vanish. We obtain the PDE

. We postulate a solution of the form

We also require that

and the terminal condition is satisfied. Substituting into the PDE yields

Here, the second step follows from

being strictly positive. Since this PDE has to hold for all values of

, the term that multiplies it has to be equal to zero and we obtain the first ODE

. Setting this term equal to zero in the original PDE yields the second ODE

The first ODE is of the Riccati type and can thus be simplified using the standard transformations for this class. We start by defining

This is a homogeneous second order linear ODE with constant coefficients and can be solved using standard methods. We note that

has been fixed and make another substitution by defining

The characteristic equation is

We thus have the general solution

and for some constants

to be determined. We obtian the solution to the Riccati ODE by back substituting

By the terminal condition 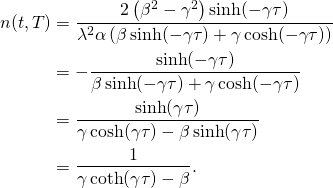 , we first note that

which can be solved by integration 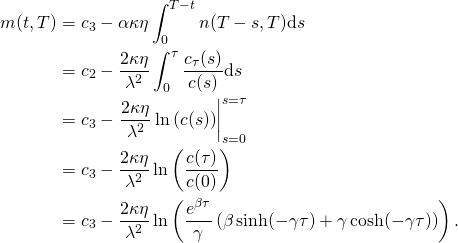 By the terminal condition

Putting everything together, we find that the Laplace transform of the integrated time-change is given by

The characteristic function of

This expression is equivalent to the ones given in Carr et al. (2003) and Schoutens (2003), who both define